On November 12th, on the occasion of the 50th anniversary of the normalization of China-Japan diplomatic relations, the 8th China-Japan Conference on Education Exchange & Cooperation was held both online and offline, with more than 200 leaders and faculty representatives from over 70 universities and colleges in China and Japan attending. Dr. Li Weiqing, the Vice President of South China University of Technology (SCUT), was invited to make a report at the conference. 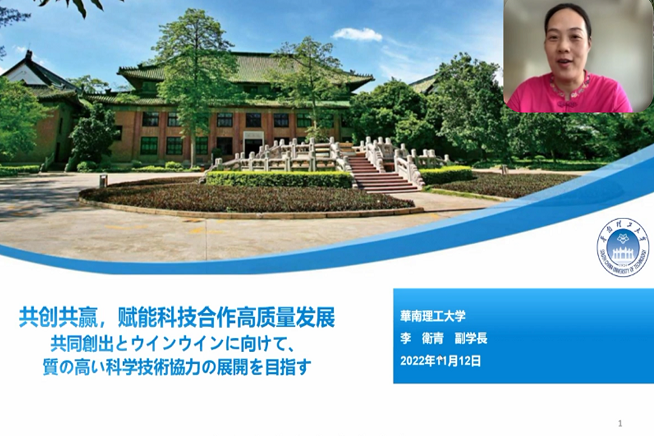 At the conference, the leaders of Chinese and Japanese universities and colleges fully exchanged views on three topics, including the joint talent cultivation in Chinese and Japanese universities and colleges, scientific and technological innovation and industry-university-research cooperation between Chinese and Japanese universities and colleges, and exchange and cooperation in Chinese and Japanese higher education in the post-COVID era. In the report entitled “To Achieve a Win-win Cooperation in Empowering the High-quality Development of Science and Technology”, Vice President Li Weiqing said that SCUT has always attached importance to scientific and technological innovation and transformation of research achievements, making full use of geographical advantages and practical experience to serve regional economic and social development. She introduced the characteristic measures taken by SCUT from four dimensions, namely, the innovation of scientific research system and mechanism, the establishment of scientific and technological achievements transformation system, the promotion of interdisciplinary integration, and the building of high-end international cooperation platform. Taking the School of Emergent Soft Matter as an example, she particularly introduced the achievements and experience of the School in exchanging and cooperating with Japanese universities and colleges in areas such as the system and mechanism structure, scientific research, faculty introduction, and talent cultivation. She expressed that, standing at the new historical starting point of the 50th anniversary of the normalization of China-Japan diplomatic relations, SCUT is willing to work with its Japanese counterpart to promote high-quality development of science and technology and cultural exchanges between the two countries. 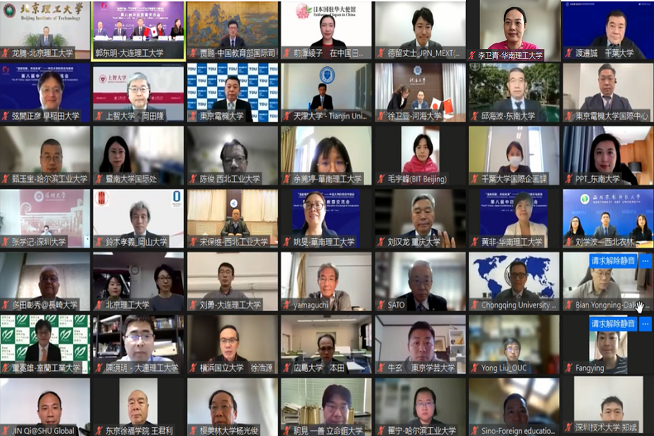 It is reported that China-Japan Conference on Education Exchange & Cooperation, which has been successively held in China and Japan since 2013, is now an important platform for bilateral higher education exchanges. This time was hosted by China Education Association for International Exchange (CEAIE), and organized by Dalian University of Technology and Japan-China Culture Center. Attendees included Liu Limin, President of CEAIE, Kong Xuanyou, Ambassador Extraordinary and Plenipotentiary of the People’s Republic of China to Japan, Maesawa Ayako, Counsellor for Education, Sports and Culture, Embassy of Japan in China, Jia Peng, Vice Director of the Department of International Cooperation and Exchanges, Ministry of Education of China, and Tokudome Takeshi, Assistant Director to the Counsellor of the Higher Education Bureau, Ministry of Education, Culture, Sports, Science and Technology (MEXT) of Japan.