On April 15th, in order to celebrate the 15th anniversary of the cooperation between South China University of Technology (SCUT) and Rutgers University (Rutgers), the two universities held a ceremony both online and offline. Li Weiqing, Vice President of SCUT, Eric Garfunkel, Vice President for Global Affairs of Rutgers, and Richard Edwards, former Rutgers-New Brunswick Chancellor, attended the ceremony and delivered speeches. 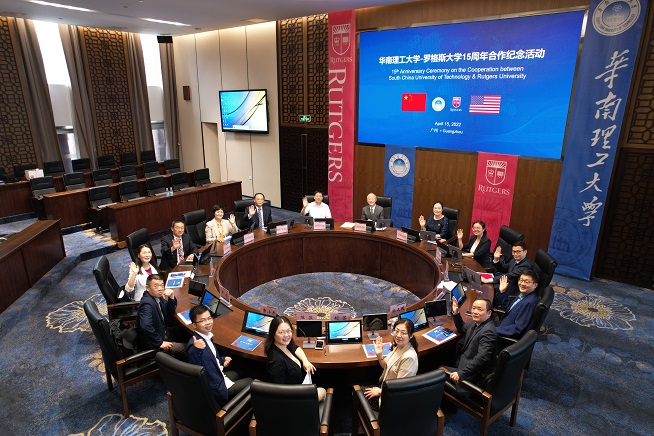 Li Weiqing said that both SCUT and Rutgers have achieved fruitful results through all-round strategic partnership based on profound mutual trust and friendship, all of which are developed from scratch 15 years ago. Li Weiqing expressed her gratitude to all the teams and personnel who have strongly supported the cooperation between the two universities for a long time. Looking to the future, Li Weiqing expected that the two universities will focus on the cooperation with in-depth expansion, quality improvement and model innovation, as well as the practical collaborations based on the Guangzhou International Campus of SCUT as a new starting point; give full play to the overseas education exchange base to extend the functions of both sides; establish an exchange mechanism for regular theme activities, such as people-to-people exchanges, to jointly face global challenges and create a model of Sino-US higher education cooperation.

Eric Garfunkel and Richard Edwards sent their best wishes to the 70th anniversary of its founding and the 105th anniversary of its origination of SCUT. Eric Garfunkel said that higher education exchange is not only a channel but also an important task for both sides to promote the exchange of global values. The important dialogues and discussions through these exchanges can broaden students’ international horizon and deeply influence their academic achievements. Eric Garfunkel hoped that the two universities will continue to cooperate closely and make modest contributions to creating a good international education pattern through academic diplomacy. Richard Edwards said that it’s precious to launch the ROSE (Rutgers Overseas Semester Experience) program in response to the challenges of COVID-19. “Without a solid foundation for many years, this scale and depth of cooperation cannot be achieved”, said Richard Edwards.

In order to successfully hold the well-prepared ceremony, SCUT produced a commemorative video and a picture album, and invited initiators and promoters of the cooperation between the two universities in various periods. The initiators and promoters of both sides actively attended the ceremony. The SCUT side included the directors of the International Office, Academic Affairs Office, Office of Global Affairs of GZIC, School of Electronic and Information Engineering, School of Microelectronics, School of Chemistry and Chemical Engineering, School of Environment and Energy, School of Business Administration, Business of Journalism and Communication, and School of Public Administration. The Rutgers side included Lily Young, former Rutgers-New Brunswick Provost, deans and directors of School of Environmental and Biological Sciences, Business School and School of Engineering, and other managers of Rutgers Global.

By watching the commemorative video at the ceremony, which was produced in the process of seeding, harvesting and innovating, the attendees recalled the efforts and achievements made in student cultivation, teacher exchange, teaching and scientific research, platform establishment, people-to-people exchanges and other fields between the two universities over 15 years. 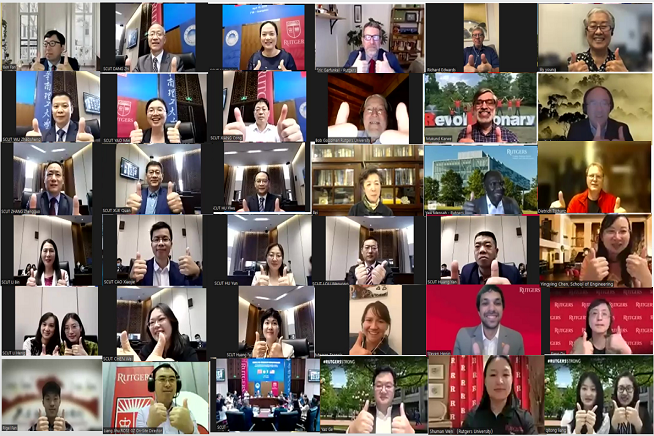 It is reported that the cooperation between SCUT and Rutgers began in 2007. The first undergraduate 2 + 2 dual degree project was launched in Environmental Engineering in 2008. Over the past 15 years, the two sides have signed more than 30 cooperative agreements, jointly built a number of teaching and scientific research platforms such as the Sino-US Innovation College, and carried out joint training in eight disciplines such as environment, telecommunications, food and chemical engineering. Nearly 300 students from SCUT have been sent to Rutgers for study, and more than 100 teachers of the two sides have visited each other. In light of the COVID-19, the two sides innovatively launched ROSE program in 2020, through which 341 students from Rutgers were studying in SCUT as of April 2022. Besides, the two universities set up the overseas exchange base to explore overseas development in 2020, and carried out the co-teaching course English for Academic Purposes and Technical Communications in 2021.

(Photographed by the student correspondent, written by the International Office, translated/proofread by the Office of Global Affairs, GZIC)