Top 1! Students of SCUT won the highest honor in MCM/ICM

On April 28th, it was officially announced that South China University of Technology (SCUT) has won two Outstanding Winner awards, the highest awards in the American College Student Mathematical Contest in Modeling & Interdisciplinary Contest in Modeling (MCM/ICM) 2020. The number of the awards is in the second place among all the participants in the world. While, the winner team of which composed of Gao Xiang, Ye Shaochong, and Liu Jianan (with Chen Yongkuan as the instructor) has got the first prize for US $1000 in the four top MCM/ICM teams from all over the world who won the COMAP Scholarship Award. 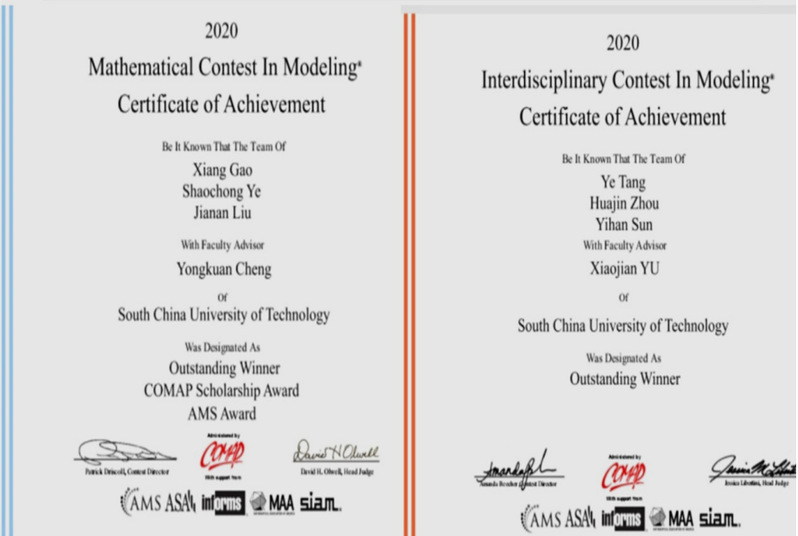 The American College Student Mathematical Contest in modeling (MCM/ICM), sponsored by the American Mathematical and its application Federation, is the only international mathematical contest in modeling, and is also the most influential mathematical contest in modeling in the world. The content of the contest involves many fields, such as economy, management, environment, resources, ecology, medicine, safety, and future science and technology. In addition, the contest requires that each team should consist of three undergraduates, and complete all the work to solve a designated problem, from modeling, proposing solutions, verification to writing the thesis within four days so as to examine the students' research ability, problem-solving skills, and teamwork spirits.

The 2020 MCM/ICM was reported to attract 20948 teams from the USA, Australia, Canada, Canada, China, UK，India and other countries and regions around the world. Students participating in the contest came from different universities, such as Cambridge University, Imperial College London, Harvard University, Cornell University, Peking University, Tsinghua University, Shanghai Jiao Tong University, Xi’an Jiaotong University, South China University of Technology and so on, only 37 teams among which were awarded the “Outstanding Winner” Awards, with a rate of award about 0.18%.