Nitrile-containing diaryl ethers are an important class of organic compounds and widely used as ingredient for dyestuff, pharmacy and polymer preparations. The search for their facile, efficient and cleaner synthesis continues to be of actual interest. In the current study, we apply ammonium carbonate treatment and calcination process to deposit CaO onto the surface of activated carbon. The obtained activated carbon supported CaO (CaO@AC) was found to possess high purity and small grain size. Such features made CaO@AC an efficient catalyst for nitrile-containing diaryl ether synthesis. 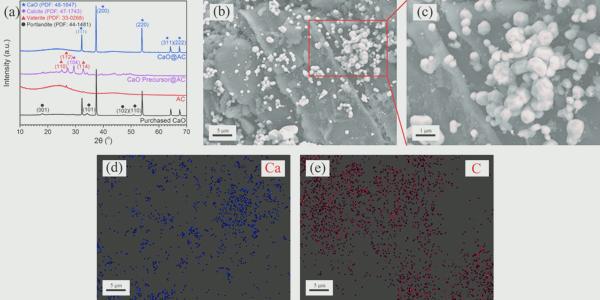 Various functional groups including methoxyl, amino, carboxyl, allyl and nitro were well-tolerated, and products were obtained in excellent yields and purities. Asymmetric substitutions could be achieved via simple adjustment of reaction conditions, and transetherification was greatly suppressed to 10-3--10-4 scale.

Figure 2 Proposed mechanism for trans-etherification during asymmetric substitution of benzonitriles.

Typically, nitrile-activated nucleophilic substitutions followed SnAr routes, and possible reactions were shown in Figure 2. Only trace amount of trans-etherification could be observed within reactions between fluoro-substituted benzonitrile and different phenols when using CaO@AC as the catalyst. However, in the case of chloro-substituted benzonitrile, catastrophic trans-etherification occurred (10-1 scale). Such phenomena were partially associated with the electro-withdrawing differences between fluorine and chlorine atoms, which makes k1,F higher than k1,Cl. What’s more important, CaF2 is extremely insoluble in NMP, while CaCl2 is partially soluble. Consequently, k3,F would be much higher than k3,Cl. The combination of higher k1,F and k3,F would significantly draw the reaction equilibrium to the desired substitution and allow for superior suppression in trans-etherification.

This effort has been published in Asian Journal of Organic Chemistry. The corresponding authors are Prof. Wenfeng Qiu (South China University of Technology) and Dr. Heng Zhou (Institute of Chemistry, Chinese Academy of Sciences).