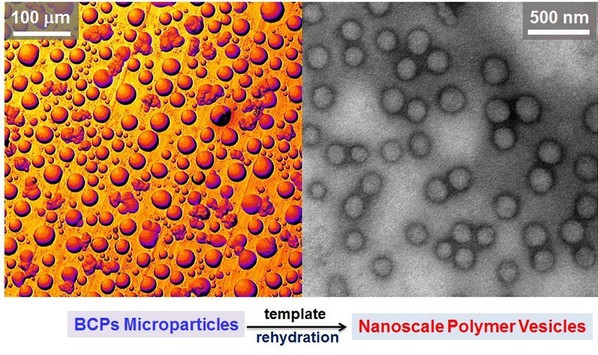 One of the most challenging and important topics in the pharmaceutical and medical fields is the intracellular delivery of drugs. One effective approach is the use of polymer vesicles as a new generation of targeted drug delivery vehicles. However, typical processes for the formation of polymer vesicles lead to ensembles of structures with a broad size distribution (from nanometer to micrometer scale) which result in a limitation for efficient cellular uptake. They report a simple and efficient strategy to produce nanoscale polymer vesicles with controllable size based on electrospraying particle and subsequent rehydration.

Polymer vesicles are self-assembled shells of amphiphilic block copolymers (BCPs) that have attracted tremendous interest due to their encapsulation ability and intracellular delivery of therapeutic agents. The carrier or vector of drugs must be designed so as to ensure intracellular delivery without compromising cell viability. However, one of the limitations in developing commercial applications for polymer vesicles is that their size and size distribution are crucial for drug delivery. Since gain control over polymer vesicle size distribution and isolate nanoscale size vesicles are vital for efficient intracellular delivery, several approaches have been developed, such as purifying polymer vesicles using size exclusion chromatography (SEC) columns, hollow fiber filtration systems, or modifying the vesicle self-assembly process through thermal cycling, patterned templated, ultrasound, microfluidic devices, membrane extrusion under high shear, etc. However, the strategies of latter are either difficult to reproduce or often not compatible with the encapsulation of sensitive agents (e.g. drugs, nucleic acids, peptides or proteins). Herein this research presents a simple and efficient approach for the fabrication of polymer vesicles with uniform nanoscale size as a direct product via the formation of a template of electrosprayed particles (Fig. 1). Fig. 1. Schematic diagram of the particle rehydration approach. First, electrospraying is applied to produce micrometer-sized templates of BCP particles. Then, the polymer vesicles self-assemble from the pre-prepared microparticles via particle rehydration.

Based on the previous work (Macromolecular Rapid Communications, 2015, 36(15), 1437-1443), electrospraying was applied to produce micrometer-sized templates of a block copolymer before polymer vesicles were formed from the pre-prepared microparticles via rehydration. Four different biocompatible diblock and triblock copolymers, comprising poly(ethylene glycol) (PEG), poly(e-caprolactone) (PCL) and poly(D,L-lactide) (PLA) blocks, were utilized to prepare vesicles via this method. Firstly, microscale-sized particles (beads and discs or platelet-like features) were created by electrospraying BCPs solutions, before the templates were used to form polymer vesicles with uniform size (approximately 150 nm diameter) via self-assembly (rehydration) (Fig. 2 and 3). 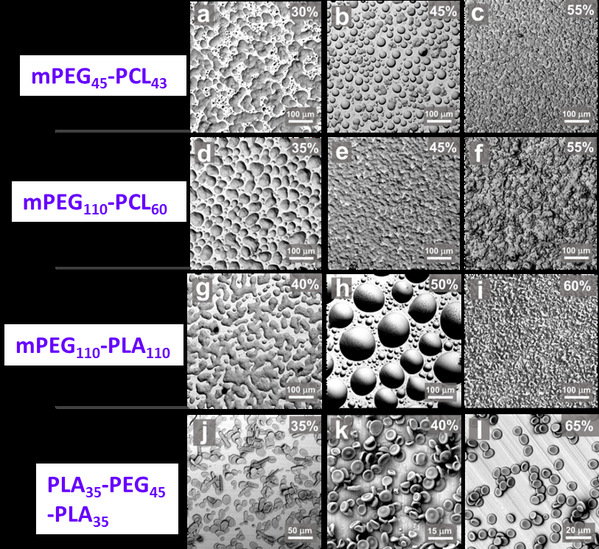 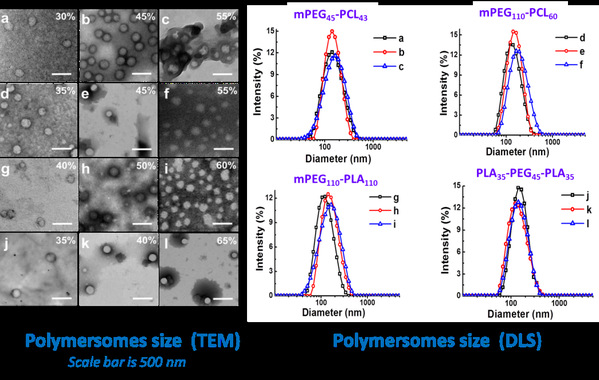 Fig. 3. (a-d) are TEM images of the polymer vesicles self-assembled from the electrosprayed particles and their size distribution by DLS.

In comparing the approach to standard methods of vesicle formation (film rehydration), the microparticles (or templates) formed polymer vesicles with a size distribution narrower than film rehydration and the overall size was also smaller. The results may be attributed to the microstructure and morphology of electrosprayed microparticles which restrict long scale migration (out-of-plane or in-plane) in aqueous solution, thus a fixed number of molecules self-assemble on the surface of the amphiphilic BCP particles such that they have a finite area. Then, these aggregates gradually “bud” away from the BCP particle surface to form polymer vesicles, whose size and size distribution are decided by the conservation of specific area. In summary, this research has developed a simple and efficient strategy to produce polymer vesicles with controllable size based on electrospraying particles and their subsequent rehydration. Microparticles (spherical or disc-like microscale particles) were created by electrospraying from different BCP solutions before the preprepared templates were used to form nanoscale polymer vesicles via self-assembly (rehydration). All of the BCPs trialled formed vesicles of uniform size (150 nm diameter) in a high throughput manner. Subsequently, a drug delivery system was successfully demonstrated using the aforementioned polymer vesicles as a carrier of drugs to achieve anticancer synergism. And this new method (particle rehydration) provides a promising way to fabricate drug-loaded polymer vesicles for intracellular anticancer drug delivery.

This result has been published in Journal of Colloid and Interface Science (2017, 508, 145-153). First Author is Dr. Weichang LI, the corresponding author is Prof. Linge WANG.