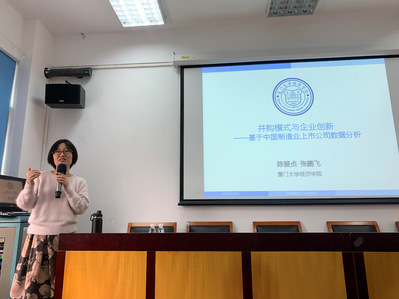 On the morning of December 13, Professor Chen Aizhen, employed in the Department of Economics, Xiamen University, was invited to give an academic report named M&A Pattern and Enterprise Innovation -- Based on Data Analysis of Chinese Manufacturing Listed Companies. The forum was held by Sun Jianqiang, the deputy president of SEC.

First of all, Professor Chen explained the background in detail.

Even though the scale of merger and acquisition (M&A) has ranked the second in the world, whether M&A can boost innovation remains to be solved. In recent years, it has raised many doubts that domestic merger is increasing but overseas one is declining. Do these two patterns have different influences on innovation? According to the reality, influencing mechanism of enterprise innovation has been compared and analyzed through domestic and overseas M&A based on data analysis of Chinese manufacturing listed companies from 2007 to 2017. Both modes can enhance innovation, and cross-border one is stronger. In a further study, both styles improve productivity and inventory of intangible assets. However, cross-border M&A will not bring monopoly, and domestic one will conduct a negative effect on innovation with its rising market power. It indicates that overseas M&A is still a significant strategy for enterprise innovation, and the monopoly caused by domestic M&A needs to be regulated.

Then, Professor Chen mentioned some difficulties encountered and the experience gained during the publication, such as the symbiosis between acquisition and innovation, and how to measure it with innovation indicators.

In the end, some students put up with doubts and technical problems in their studies, and were enlightened by the professor's answers.