Lithium-ion batteries (LIBS) have greatly changed the way we communicate and transport since they were first commercialized in 1991 due to their high energy density and long cycle life. At present, the traditional lithium ion battery with graphite as anode has approached its energy density limit, but it still cannot meet the urgent requirements of energy density for electric vehicles and sophisticated electronic equipment. Therefore, there is an urgent need to develop a new battery system to surpass the traditional lithium ion battery. Lithium metal is considered as an ideal anode for high energy density batteries due to its high theoretical capacity and low REDOX potential. However, the safety problems caused by the uncontrollable dendrite growth on the surface of lithium anode seriously hinder the practical application of lithium metal anode. In addition, the lithium metal anode is very sensitive to ambient air, which greatly increases the cost of industrial production. Therefore, it is a great challenge to design a lithium metal anode that can achieve both air stability and dendrite growth.

In view of this, Li Weishan, Professor of South China Normal University, Qiu Yongcai, Professor of South China University of Technology, and Zhou Guangmin, Associate Professor of Tsinghua-Berkeley Shenzhen College jointly reported a simple strategy to solve the lithium metal anode uncontrollable dendrite growth and air corrosion problem of lithium metal anode, eventually achieves a lithium-metal anode that can perform well after 12 hours of exposure to air with a humidity of 30%. As shown in Figure 1, fullerene (C60) and magnesium nanometer protective layer were evaporated on the surface of lithium foil by a simple vacuum thermal deposition technique. The C60 layer is not only conductive and hydrophobic, but most importantly, it can isolate the reaction between the surface magnesium layer and lithium metal. Because magnesium has a certain solubility in lithium at room temperature, it will destroy the protective layer of magnesium. With the C60 isolation, the magnesium can form a very uniform nanoprotective layer on the surface of the C60. The magnesium layer forms a dense magnesium oxide film when it comes into contact with air, which prevents further air damage to the interior of the lithium anode. In addition, the surface magnesium metal can also act as the active site of lithium metal deposition, guiding the uniform deposition of lithium around the active site and eliminating lithium dendrite. At the same time, the internal C60 layer can also reduce the side reaction between the electrolyte and lithium metal to a certain extent.

Electrochemical performance tests showed that Mg@C60 @li exhibited better cycling stability when matched with commercial lithium iron phosphate (LFP) after 12 hours exposure in air with humidity of 30%. The results of this study have been published in Advanced Energy Materials as 'Air-stable and Dendrite-freelithium metal anodes enabled by a hybrid interphase of C60 and Mg'. Xu Qingshuai, a joint graduate student from South China Normal University and South China University of Technology, is the first author of the work. 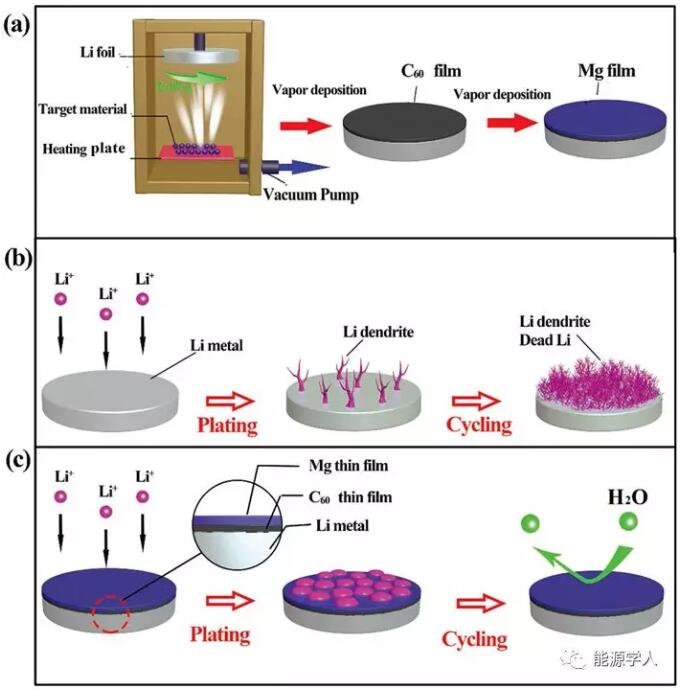 Figure 1. Schematic illustration on the fabrication of Mg@C60@Li anode and the contribution of the hybrid interphase to the improved humid resistance and cyclic stability of Li‐metal anode. a) The hybrid interphase consisting of dense fullerene (C60) and magnesium metal bilayer is developed on lithium foil by vacuum evaporation deposition. b) Li anode with Li dendrite growth. c) Mg@C60@Li anode with dendrite suppression and humid resistance. 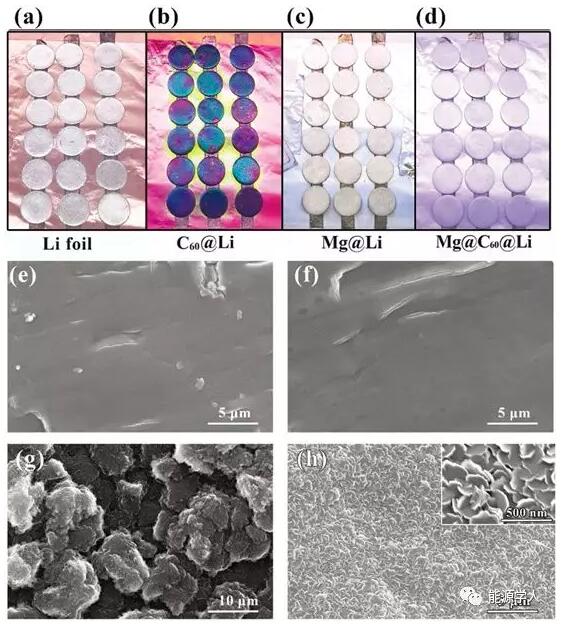 By comparing the SEM images of different anodes in Figure 2, it can be observed that a dense Mg layer can be formed on the surface of lithium foil only when a stable protective layer of C60 is first constructed on the surface of lithium foil to isolate the reaction between Mg and Li. In the absence of the C60 isolation layer, Li will seriously damage the Mg protection layer, as shown in Figure 2G, which cannot achieve the air stability of the lithium metal anode. 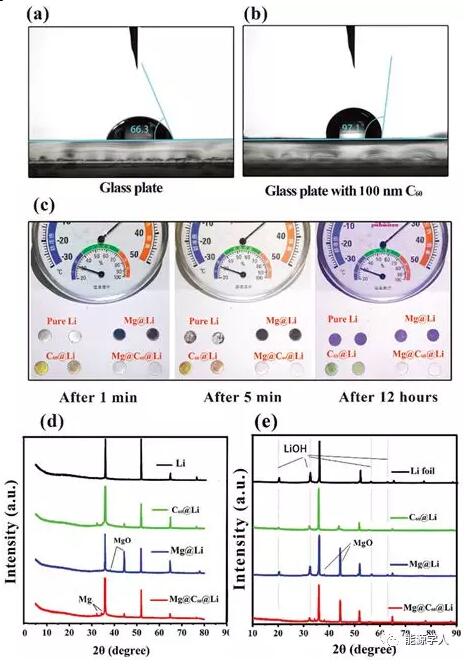 In Fig. 3, optical images and XRD showed that after 12 hours of exposure at the relative humidity of 30%-40% in the air, the Mg@C60@Li anode was not eroded by air after exposure, but the presence of LiOH was observed in both nitrous and nitrous layers. This indicates the excellent air stability of the Mg@C60 @li anode. 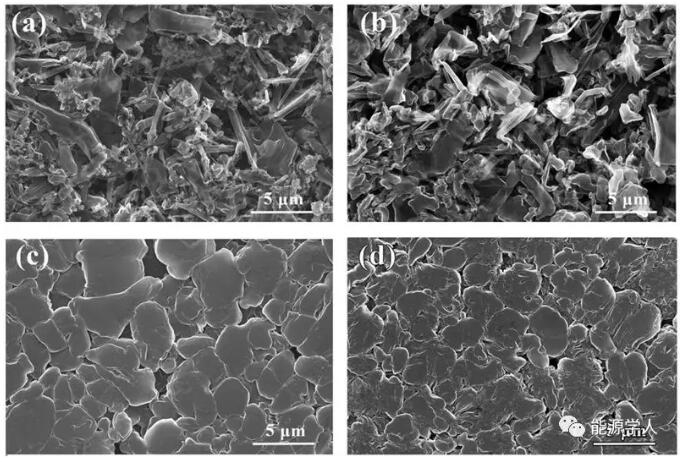 By comparison, it can be found that both Mg@Li and Ad@Li can inhibit the growth of lithium dendrites when Mg is introduced on the surface of Li foil, which is consistent with the purpose of design. 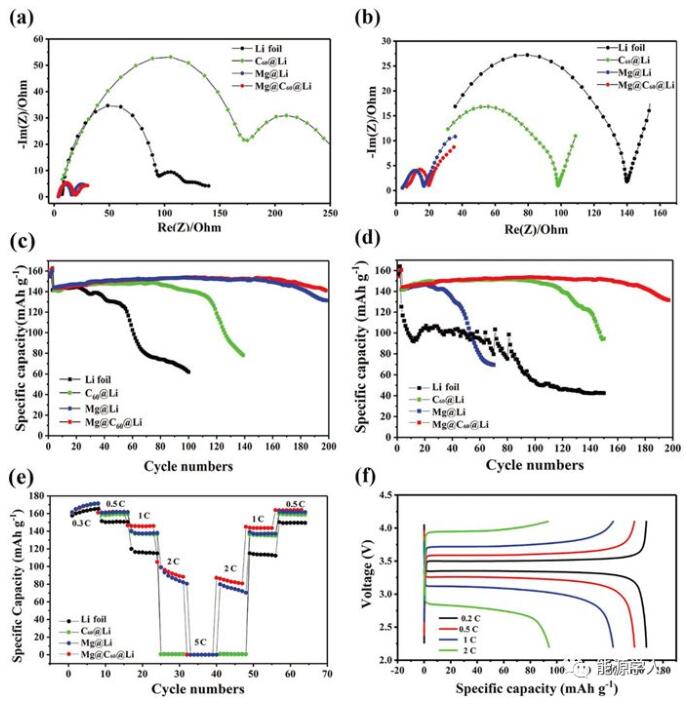 An an air‐stable and dendrite‐free Li metal anode Mg@C60@Li has been successfully fabricated by the research teams. A hybrid interphase consisting of C60 and magnesium metal films can be developed on the surface of lithium foil by vacuum evaporation deposition. The hydrophobic C60 film enables the anode with humid resistance, while the Mg film provides the anode with low Li depositing/stripping overpotential. With this unique hybrid interphase, the resulting Mg@C60@Li presents excellent cyclic stability and rate capability. Particularly, after the Mg@C60@Li anode is exposed the air of 30% relative humidity for 12 h, the Mg@C60@Li anode after humid attack presents a far better cyclic stability than Mg@Li. The LiFePO4//Mg@C60@Li full cell delivers a reversible discharge capacity of 131.1 mAh g−1 after 200 cycles, compared to 71.2 mAh g−1 of LiFePO4//Mg@Li full cell. The strategy developed in this work thus provides a new design avenue for lithium metal anodes in large‐scale practical applications.