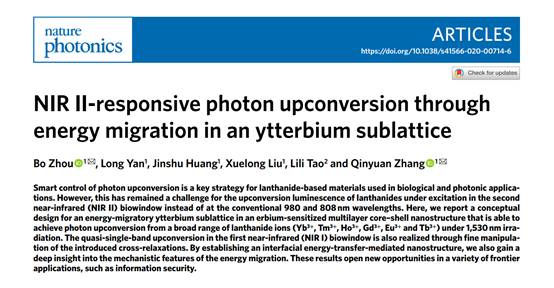 Photon upconversion is a nonlinear anti-Stokes process featuring high-energy photon emission under low-energy photon irradiation, playing an important role in many frontier fields such as upconversion laser, three-dimensional volumetric displays, information storage and security as well as biological imaging. The special 4f electronic configuration of lanthanide ions allows multiple upconversion emission profiles covering from the near-infrared to visible and near-ultraviolet. Despite great progress in research on upconversion, previous works have been mainly dependent on the upconversion systems with excitation wavelengths in the short near-infrared region (for example, 980 and 808 nm). The longer infrared second near-infrared (NIR-II) has attracted increasing interest because of its potential applications in optical communications, nanophotonics and biological applications.Therefore, the research on NIR-II-responsive photon upconversion would contribute markedly to fundamental research on luminescent materials as well as their frontier applications.

Among the lanthanide ions, Er3+ has strong absorption at around 1.5 μm, however, it cannot work as NIR-II sensitizer in a common co-doping system because it suffers from deleterious quenching interactions. Other lanthanide ions are non-responsive to the 1.5 μm wavelength due to the mismatch of metastable energy levels. This intrinsic limit makes NIR-II-responsive photon upconversion remain a challenging. 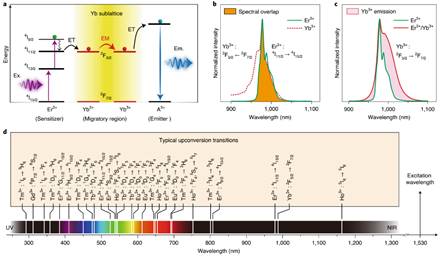 Recently, Prof Zhou group describe a novel mechanistic strategy to realize the NIR II-responsive upconversion from a series of lanthanide ions (Figure 1). In this design, erbium sensitizer and luminescent emitters are spatially doped in the core and shell regions, which are separated by a migratory ytterbium sublattice interlayer to isolate any unwanted quenching processes. The experimental results suggest that the excitation energy can be efficiently transported from the sensitizer to the emitter through the Yb3+-mediated energy-migration channel in an optimal core-multi-shell nanostructure. As a result, the photon upconversion was enhanced significantly under NIR-II excitation. It is worth noting that the ultraviolet upconversion (Gd3+: 311 nm) features an anti-Stokes shift as large as 1,219 nm is also obtained through this mechanistic strategy. A sensitizing-migratory-detecting core-shell nanostructure was further constructed to examine the mechanism of energy migration of ytterbium sublattice (Figure 2). 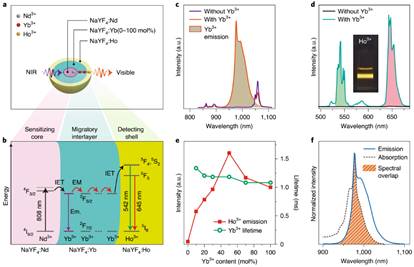 Figure 2. Mechanistic investigation of energy migration in the Yb sublattice.

In order to realize the NIR-I single-band upconversion of Tm3+ at around 802 nm, Ce3+ was introduced into the core matrix to depopulate its visible-emitting levels through cross-relaxation.NIR-II to NIR-I quasi-single-band upconversion was successfully achieved for samples with suitable amount of Ce3+ (Figure 3). As an added benefit, the use of an energy-migratory Yb sublattice provides an approach to manipulating the upconversion dynamics to achieve switchable control of emission colors, showing possibility for information security (Figure 4). 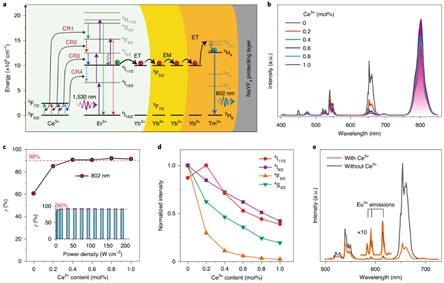 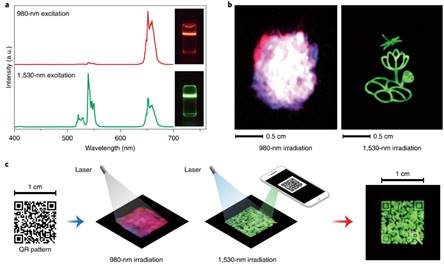 Figure 4. Color-switchable output and its application.

In conclusion, this work demonstrates a novel mechanistic model to realize the NIR-II-responsive upconversion, providing a deep understanding of energy migration on the nanometer scale as well as the physics of lanthanide luminescence. The results promote the basic research of lanthanide luminescence and also shed light on the development of novel upconversion materials.

The corresponding authors of this article are Prof Bo Zhou and Prof Qinyuan Zhang from School of Materials Science and Engineering, South China University of Technology.