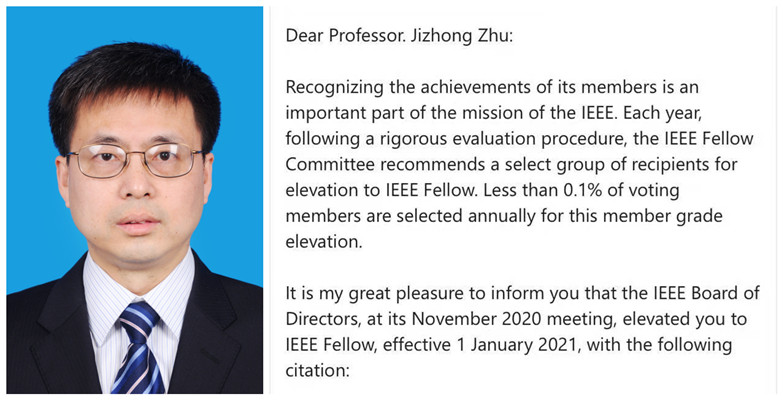 On November 25, the International Institute of Electrical and Electronics Engineers (IEEE) officially announced the list of newly elected fellows. Professor Zhu Jizhong of Electric Power Engineering School of SCUT was successfully elected for his outstanding contribution to the field of real-time economic optimal operation of power system.

It can be seen from the newly elected list that the academic contribution and international influence of Chinese in the field of electrical engineering are rising rapidly, especially the proportion of Chinese elected this year has increased significantly. Take the IEEE Power and energy society as an example. There are 17 newly elected IEEE fellows, including 9 Chinese experts, accounting for more than half.

IEEE fellow is the highest ranking member of IEEE society and the highest honor awarded by the organization. It is recognized as an authoritative honor and important professional achievement in the academic and scientific circles. It is selected by peer experts among the members who have made outstanding contributions every year, and the number of elected members does not exceed 0.1% of the total number of IEEE members. Due to the small number of IEEE fellows elected every year, the elected scientists are basically outstanding scientists who have made important achievements in the field of science and engineering technology.